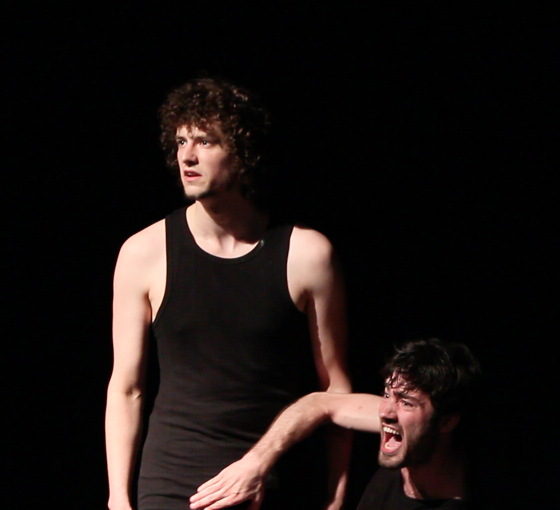 Yesterday evening, our first play together premiered in Amersfoort. The ‘Foortlanders’ switched rapidly from sketch-scenes to verbal fights, to settle their disagreement once and for all… who’s the best friend of Ruben? And where the hack is Ruben anyway? Why is he not present to point out a winner himself? And why should he? ‘Ons Eerste Toneelstuk Samen’ – which literally means our first play together’ – was all about the truth of friendship; what are the conditions for friendship to exist, and what may cause it to break?

The making of the play was something different. Thij de Haan and I have worked on several short projects in the past. Previous year, we felt the need to work on a life performance and be on stage together. Our styles and sense of humor were on a par, we only needed to figure out our meeting-point considering what we wanted to tell. We started with the very broad theme ‘war’, which we let shrink to a smaller fight during the process, one which was more clear to us and more relatable to the audience: the fight against ego, the fight to keep love part of our lives. Later in the process, we were accompanied by Kaylie de Pundert, a theatre maker/teacher with whom I’ve worked with on a youth-play previous year, and happens to be the girlfriend of Thij. Her expertise helped us to polish the whole performance, and she herself got a part on the stage.

I’ve learned a thing or two about the combination of producing, making and playing: you need to discipline yourself to focus your thoughts and concentration to one job at the time. Times when I worried about practical stuff during the proces of making, immediately interrupted my creativity. When there’s not a director and/or producer supporting the creative proces from beginning to end, it’s best to separate rehearsals from meetings.